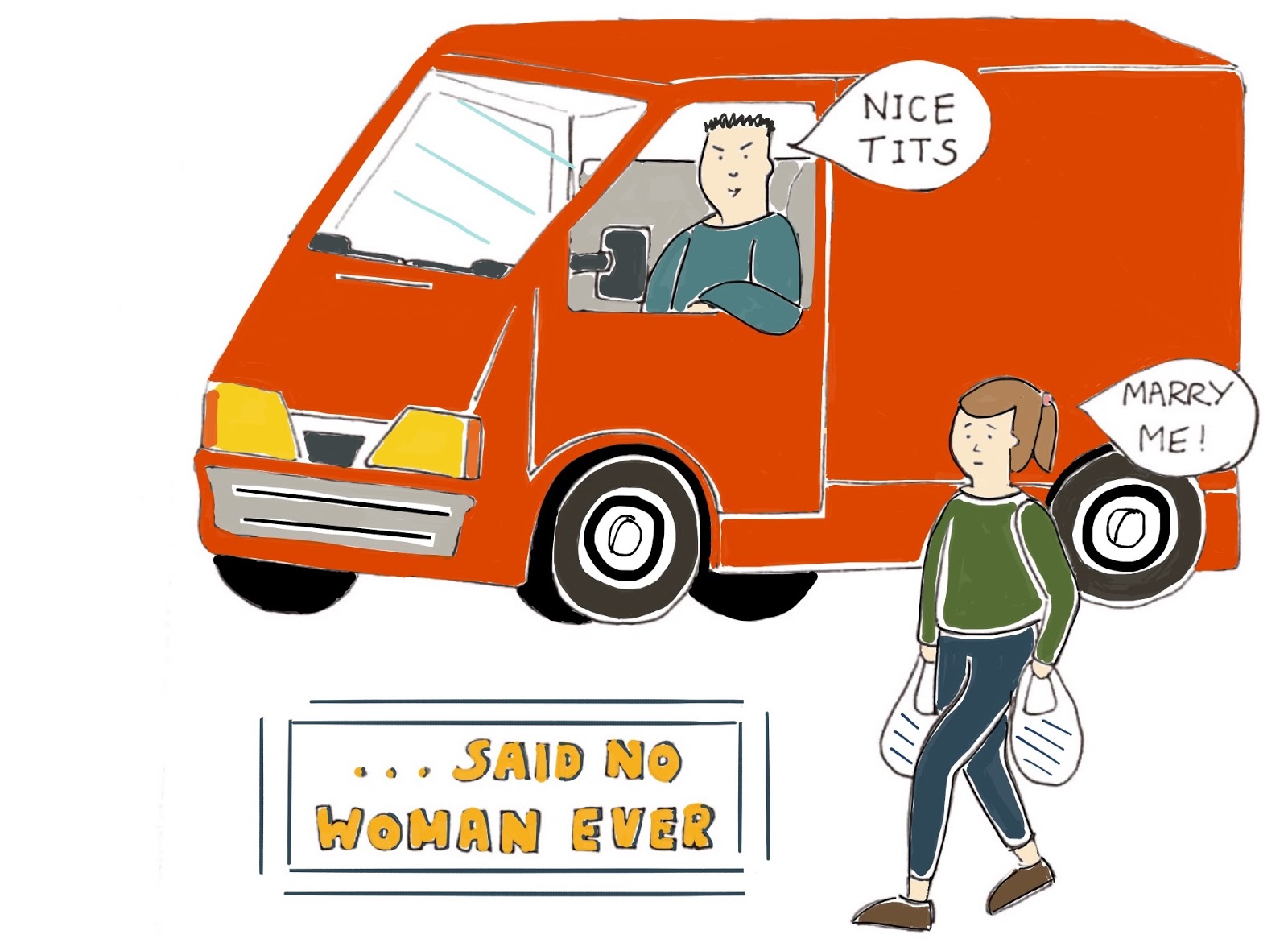 I don’t know about you but I’m not a big fan of feeling self-conscious or embarrassed. Even worse, harassed, humiliated or violated. Yet according to a significant part of our society, I must be well up for a ‘cheeky’ wolf whistle or a catcall as I walk down the street. Apparently I am supposed to take a compliment. And so it seems should 23 year old Poppy Smart, in the news last week for reporting a group of builders to the police after they sexually harassed her on her way to work. The fact that this was a month long period of verbal abuse was somehow overlooked, rather the story went that ‘girl gets whistled at and calls the police’.

Charming online responses to the story included “who would do that to her anyway ugly bitch” and “I’d say she was lucky to get a whistle. She needs a bag over her head”. Another compassionate observer commented “like the Police haven’t got enough to do. Should be done for wasting their time”. Apparently Poppy should have lightened up; her experiences were viewed as trivial in comparison to the stir she had made. Indeed, writer Laura Bates summarised it perfectly in her article for The Guardian, when she wrote that the reactions to the story seemed to suggest that “as a society, we are more concerned about, and outraged by, a young woman’s audacity in standing up to sexual harassment than we are about the month-long, everyday campaign of verbal abuse she endured on her walk to work.”

Hearing about this story and the responses to it made me feel sick. These attitudes were not just from a few internet trolls, they were represented in the papers too, and the questions raised by the story were discussed on daytime television, because as Bates also pointed out in her article, “We have not conclusively agreed, in 2015, that women have the right to walk the streets, wearing whatever they choose, without being shouted and whistled at.” It’s important to note that there were women in the media who disagreed with this point, citing whistling as flattery – indeed this is not a male versus female debate. However, I would wholeheartedly disagree – if in our society, uninvited sexual leering from a stranger makes us feel good about ourselves, then I would suggest we have a self-esteem problem.

One day this week on my way home from work, I was greeted by the sound of whistling and jeering from a couple of passing van drivers. It made me feel flushed and uncomfortable, as it always does. Whenever and wherever I am when this happens, my first thought is about what I am wearing. Did I encourage it? Did I invite it? What I was wearing however should be completely irrelevant, because it is never our fault or our provocation. It is entirely the blame of the harasser. What is the big deal? You might ask. I wasn’t in any danger, surely it was harmless? Well I probably wasn’t in any danger when two strangers passed by me and said ‘nice tits’ as I walked to do my weekly shop. I doubt I was in any real danger when a man smacked my bum in a club, or when one put his hand up my skirt, or when another grabbed one of my boobs and squeezed it as he walked past. I wasn’t in any danger when a guy from my year at college thought it would be funny to put his face in my chest on a night out. But all of these incidents, amongst countless others, made me feel violated. These people had objectified me with one swift movement, one quick comment. This list is not meant for pity, and nor is it to criticise or vilify men. It is rather a snapshot of any 25 year old girl’s life experience. Tragically, many experience far, far worse.

I do not pretend for a minute that a wolf whistle is anything close to sexual assault. But it isn’t a compliment either. Yes that afternoon I wasn’t in danger, but it is an example of how women are continually harassed yet encouraged to blame themselves for it. It is on a sliding scale, from the catcalls, to the groping and more. And usually we let it slide, for fear of being labelled a silly girl causing a fuss like Poppy Smart. Let me walk down the street in peace.